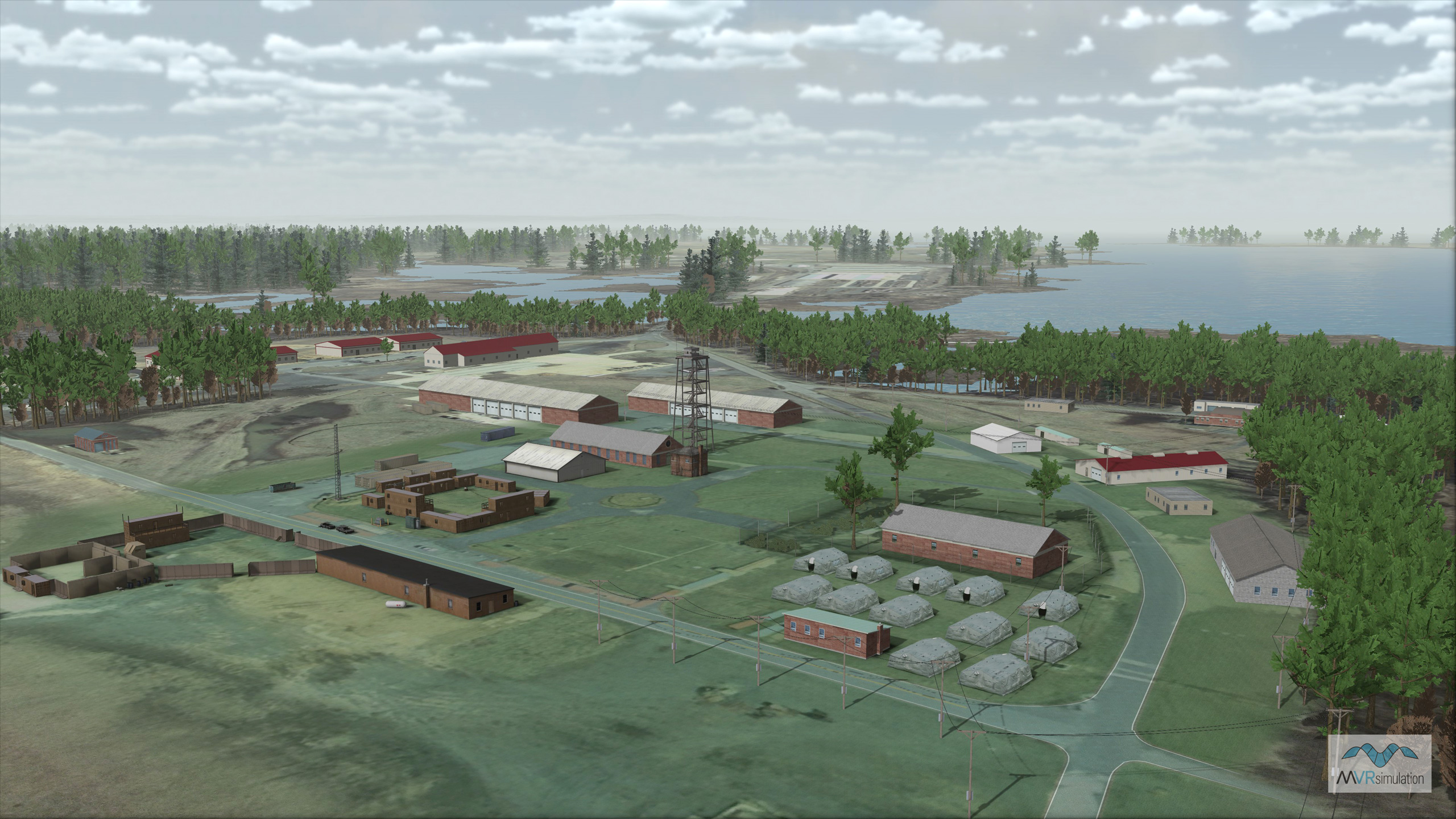 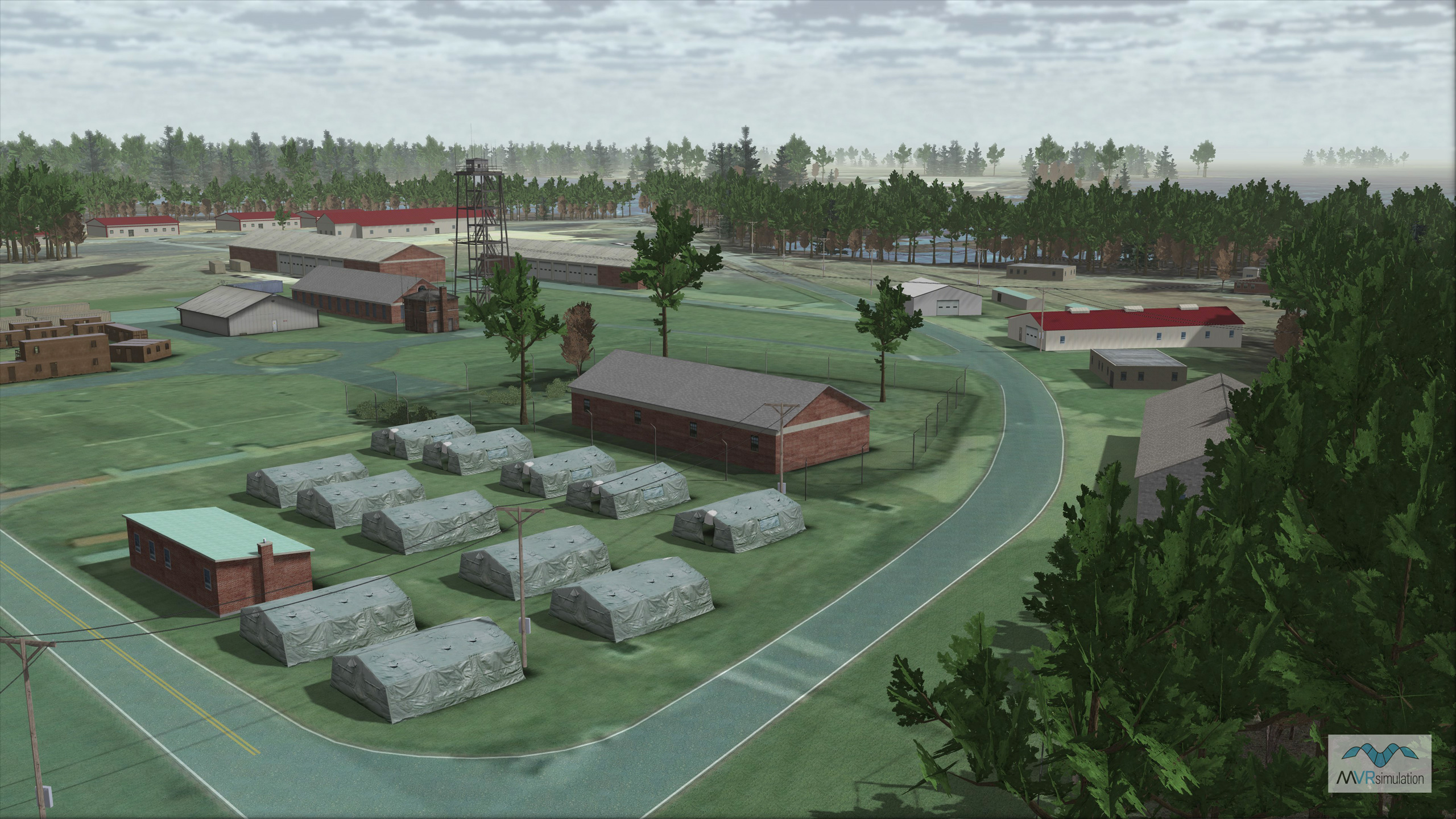 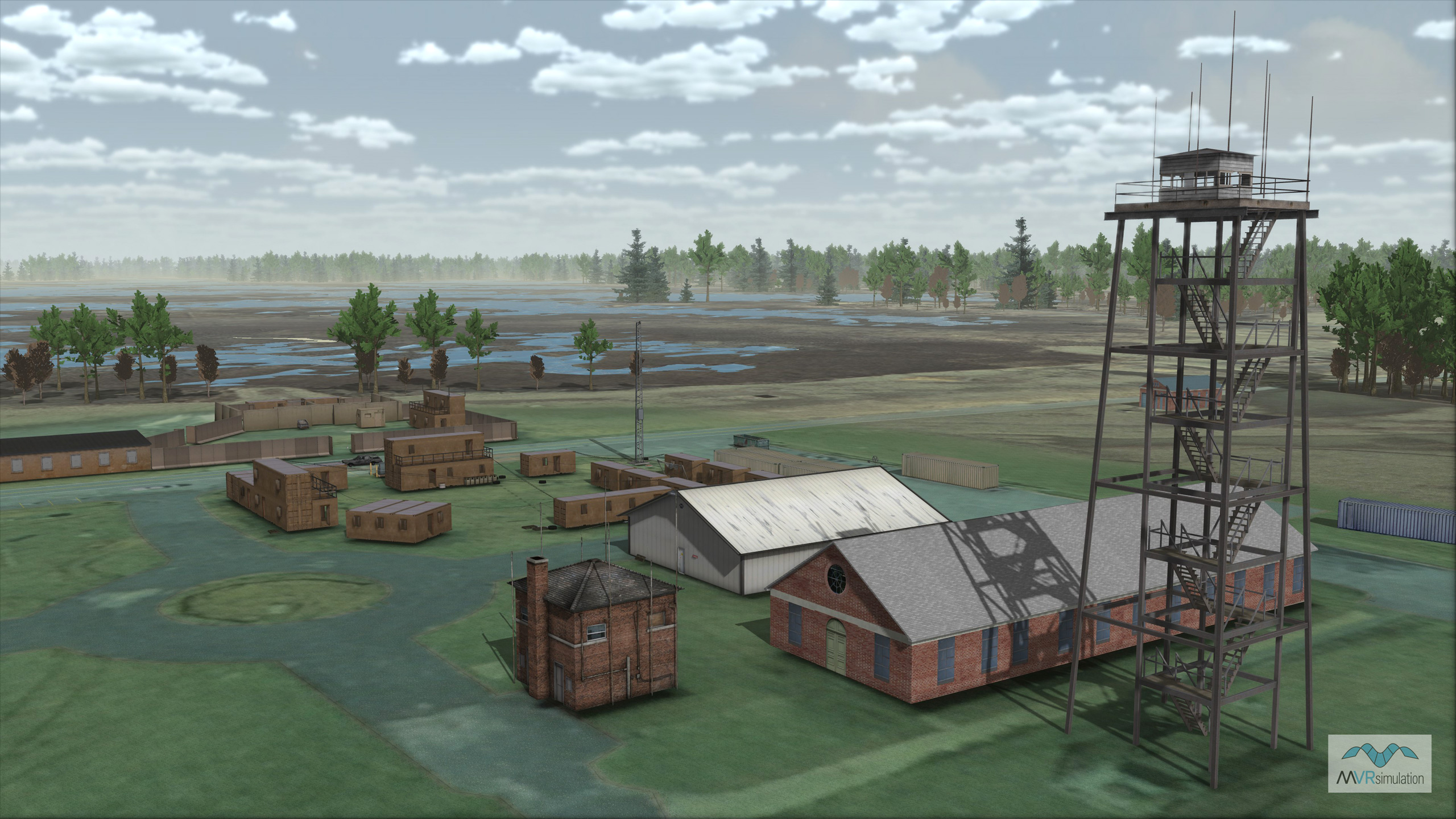 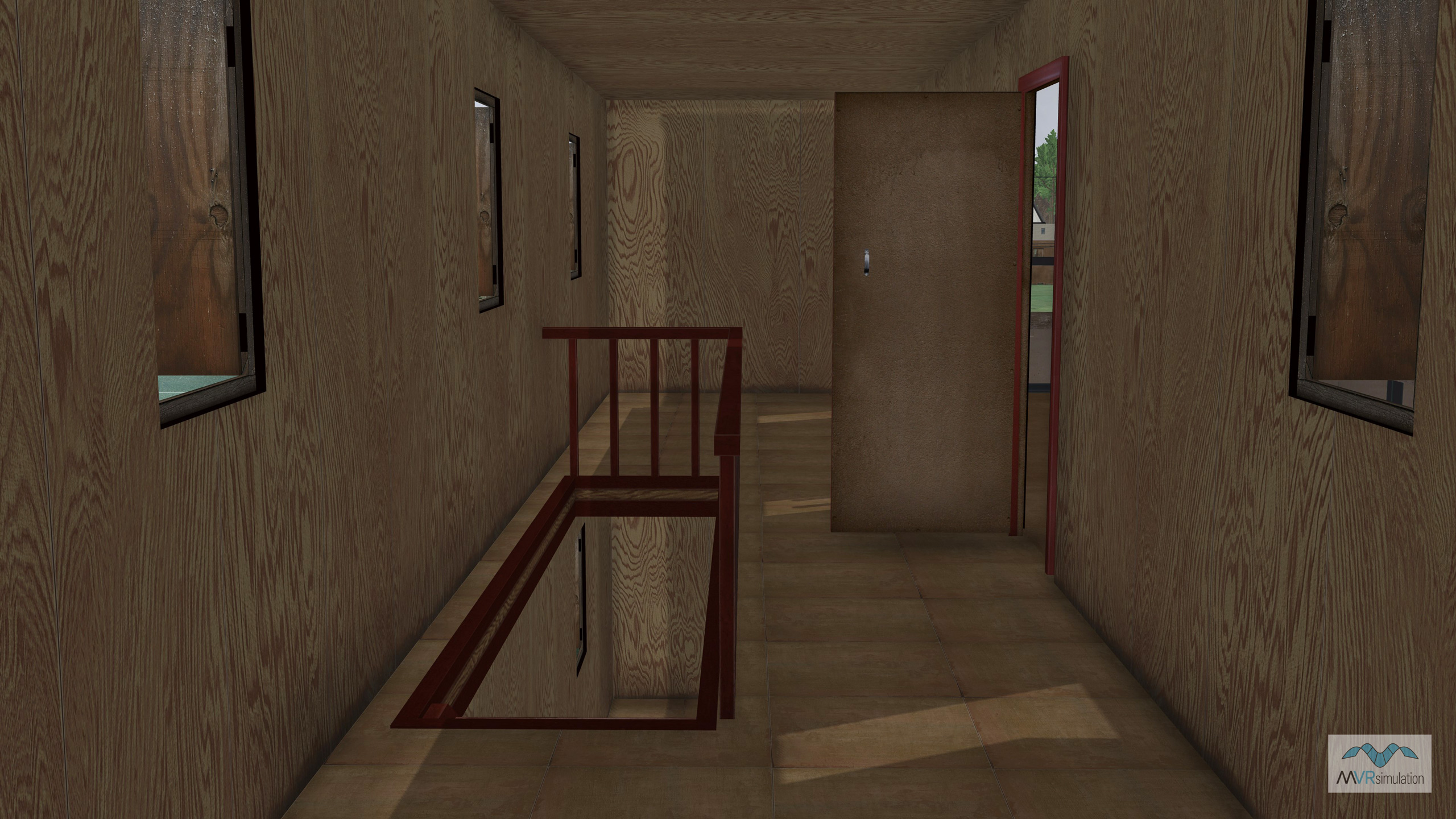 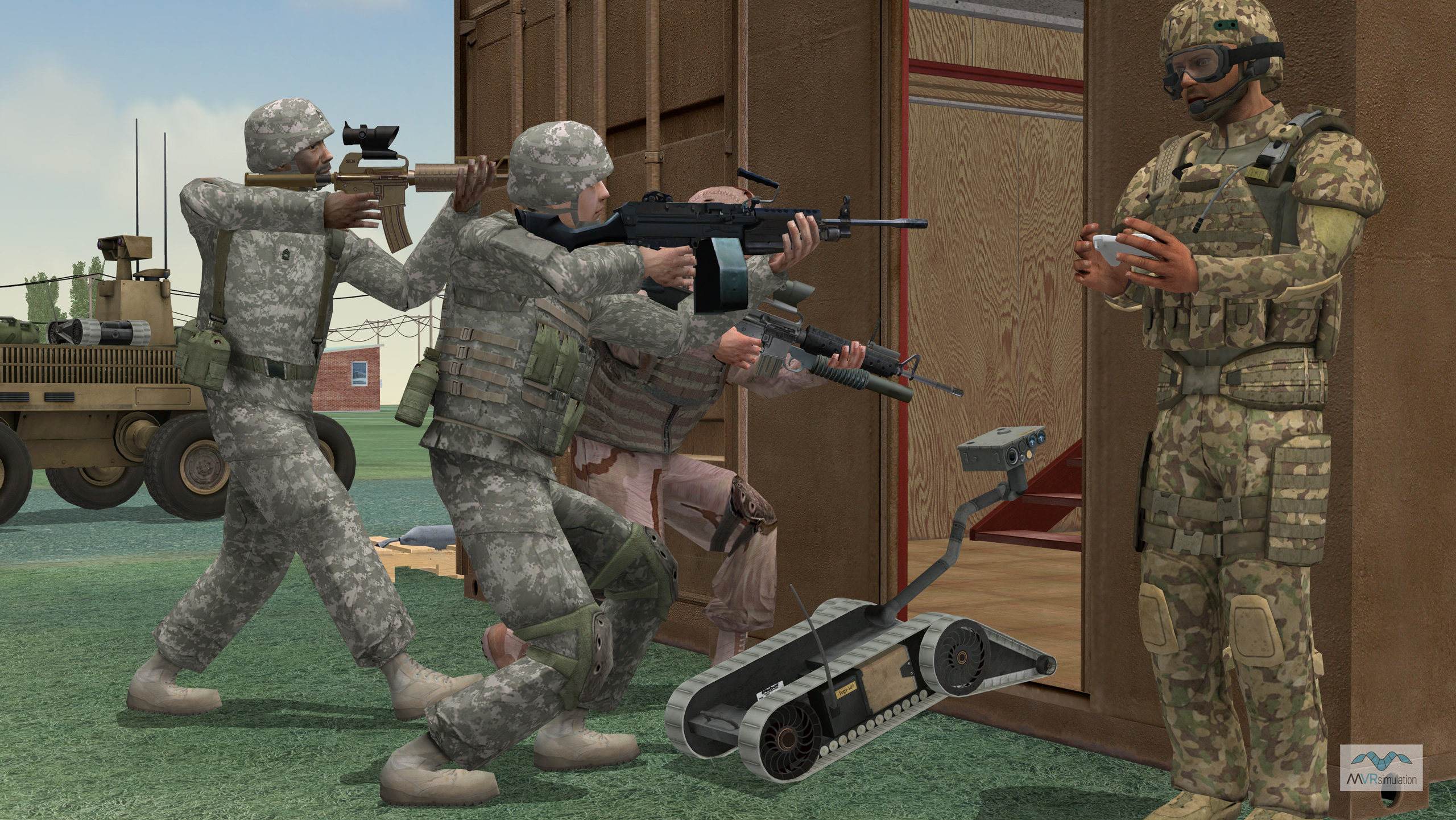 MVRsimulation VRSG real-time scene featuring soldiers and an SUGV at the entrance of a structure on the virtual ATC Mulberry Point MOUT site at Aberdeen Proving Ground. 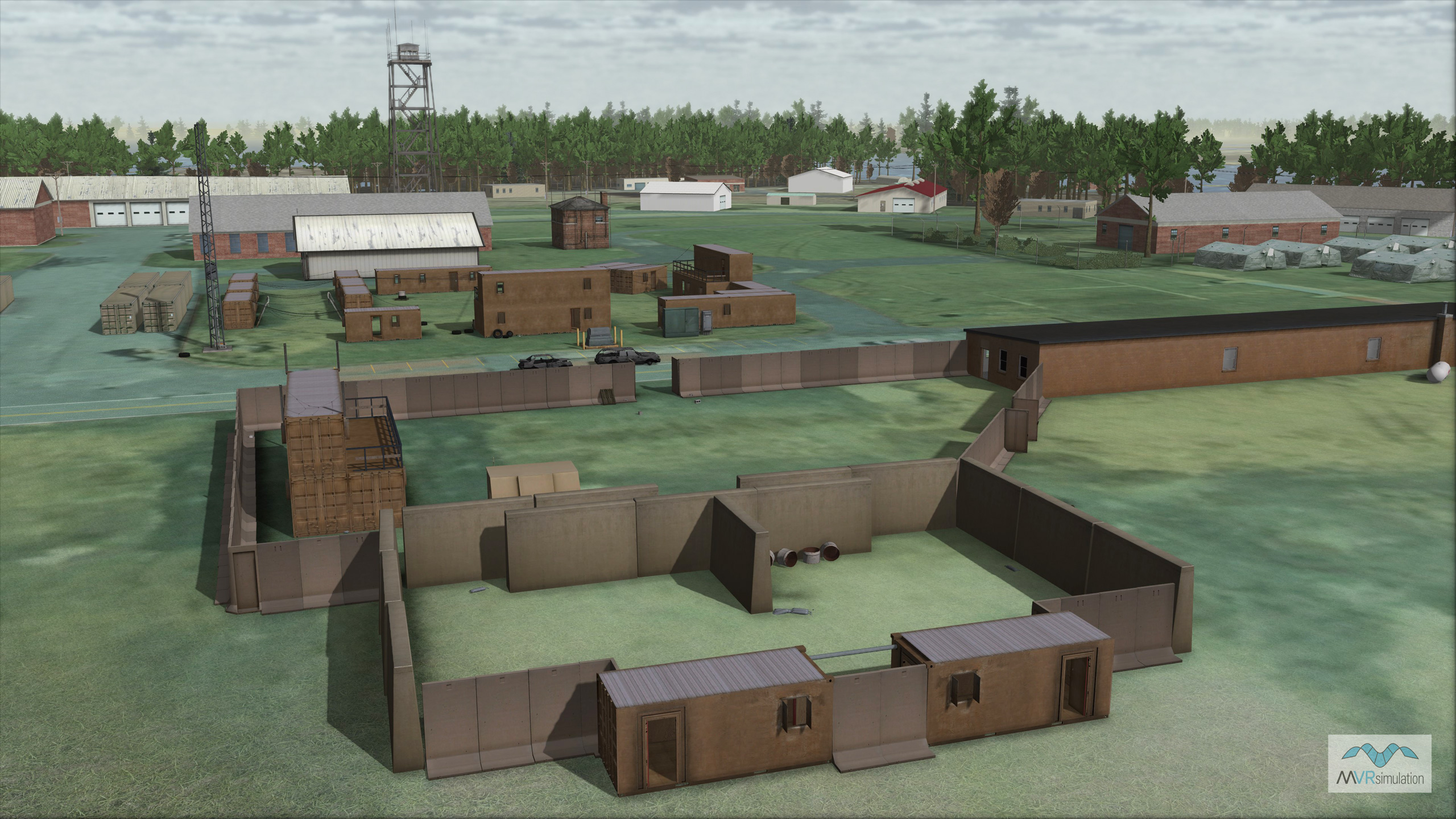 Because this virtual ATC terrain matches the actual facility to a significant degree of accuracy, the simulated MOUT site can be used in Virtual Reality Scene Generator (VRSG) for simulations such as prototyping the interaction of small unmanned ground vehicles (SUGV) with infantry in a simulated urban setting.Since its inception in 1918, ATC has developed into a diverse rigorous DOD test site. The Mulberry Point area of ATC is the home of the Soldier Systems Test Facility (SSTF) which provides present and future warfighters the resources to test and demonstrate a broad spectrum of military weapons systems and equipment. The facility's MOUT site is a compound of fixed and reconfigurable structures within a road network. The varied terrain and movable structures enable the testing of diverse mission capabilities.

About the 3D terrain

The 3D terrain, built with MVRsimulation Terrain Tools for Esri® ArcGIS®, was constructed from 0.15 mpp per pixel imagery over the entire Aberdeen Proving Ground and surrounding area and 8 meter per post elevation data. The 350 sq km terrain is in MVRsimulation's round-earth VRSG terrain format. Nearby modeled culture areas (also with 0.15 mpp imagery) are the BWI Thurgood Marshall and Martin State airports.

The terrain geometry created by MVRsimulation Terrain Tools includes a high-resolution representation of the Mulberry Point coastline on the Chesapeake Bay. At runtime, VRSG generates multi-textured, animated, normal-mapped water surfaces in the cutout regions identified as water. The terrain seamlessly transitions to the simulated water generated by VRSG.

The virtual MOUT site area contains over 20 geospecific photo-textured structures and over 124,000 volumetric trees of varying types, power lines, and poles. The site-specific culture models were built with industry standard 3D modeling tools such as Autodesk Maya and 3ds Max, and then converted to MVRsimulation's model format. The models are available in MVRsimulation's 3D model libraries. Models were placed on the terrain with Scenario Editor.

All MOUT site-specific models were created with textures derived from high-resolution photographs taken at the actual site, at ground level, with a high-resolution digital camera. All high-resolution MOUT building models contain modeled interiors and articulated doors and windows. The database makes extensive use of other elements such as street lights, oil drums, power cables, and fences. All models are in MVRsimulation’s model format.

Actual and simulated views of the MOUT site at Mulberry Point

Below is a series of images of ATC's MOUT site at Mulberry Point. You can compare photographs of the actual MOUT site on the left with VRSG screen captures of the simulated view on the right. The models of buildings and other structures are photorealistic; the models were created from photographs taken of the area.

MVRsimulation’s virtual Aberdeen Proving Ground with Mulberry Point MOUT site is available as part of the Northeast US region of CONUS++ 3D terrain, and available to all customers who are on active VRSG software maintenance and are US Government agencies or contractors (for official use only). For US-domestic use only, not available for export. The terrain is provided in MVRsimulation's round-earth terrain format and will only run with a valid VRSG software license with active software maintenance.