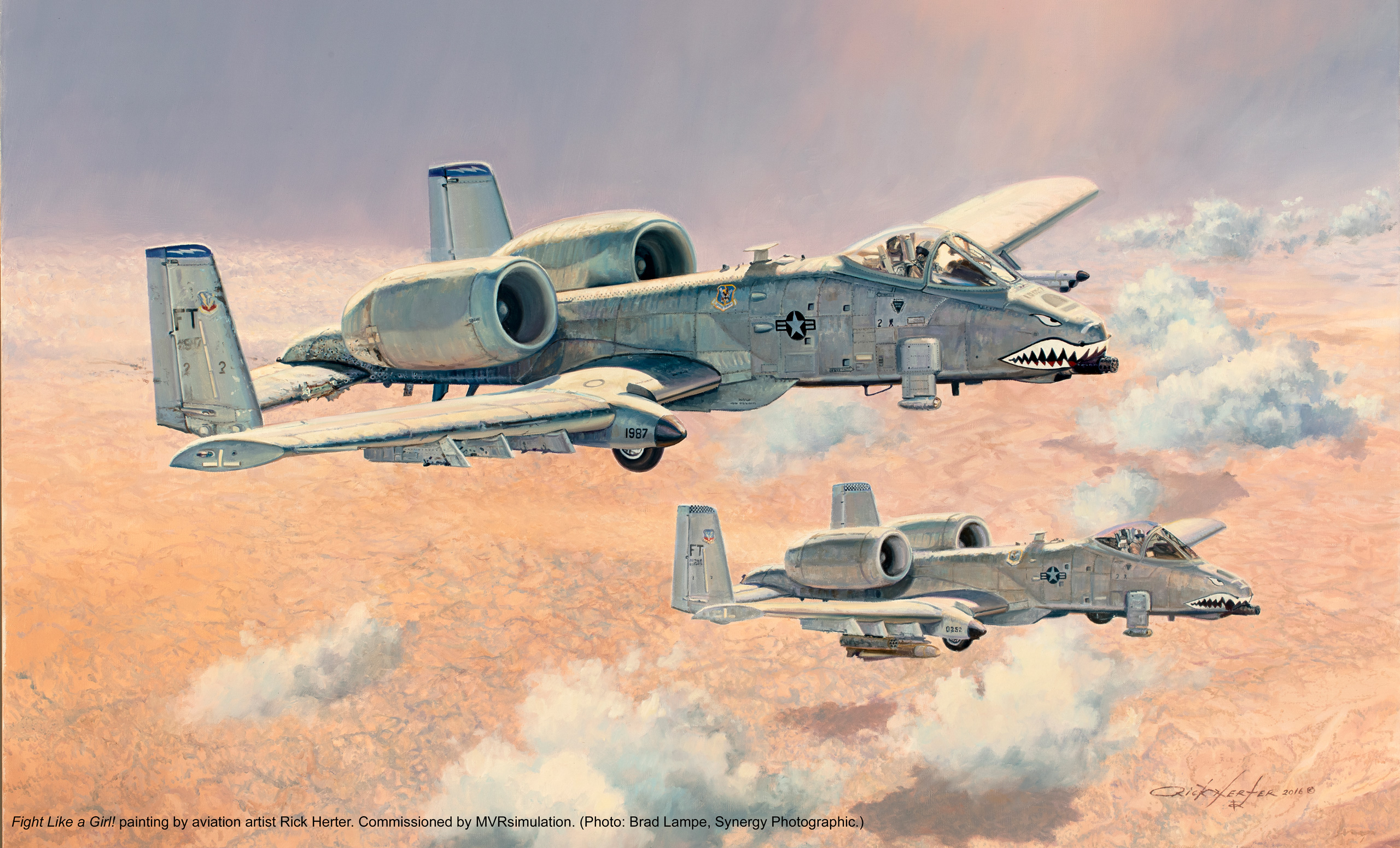 MVRsimulation has donated a painting we commissioned from aviation artist Rick Herter to the US Air Force Art Collection. The painting, “Fight Like A Girl!,” shows a heavily damaged A-10 Warthog returning from a mission in Baghdad shortly after the invasion in 2003 and depicts a remarkable story. The painting is housed at the US Air Force Academy, CO. 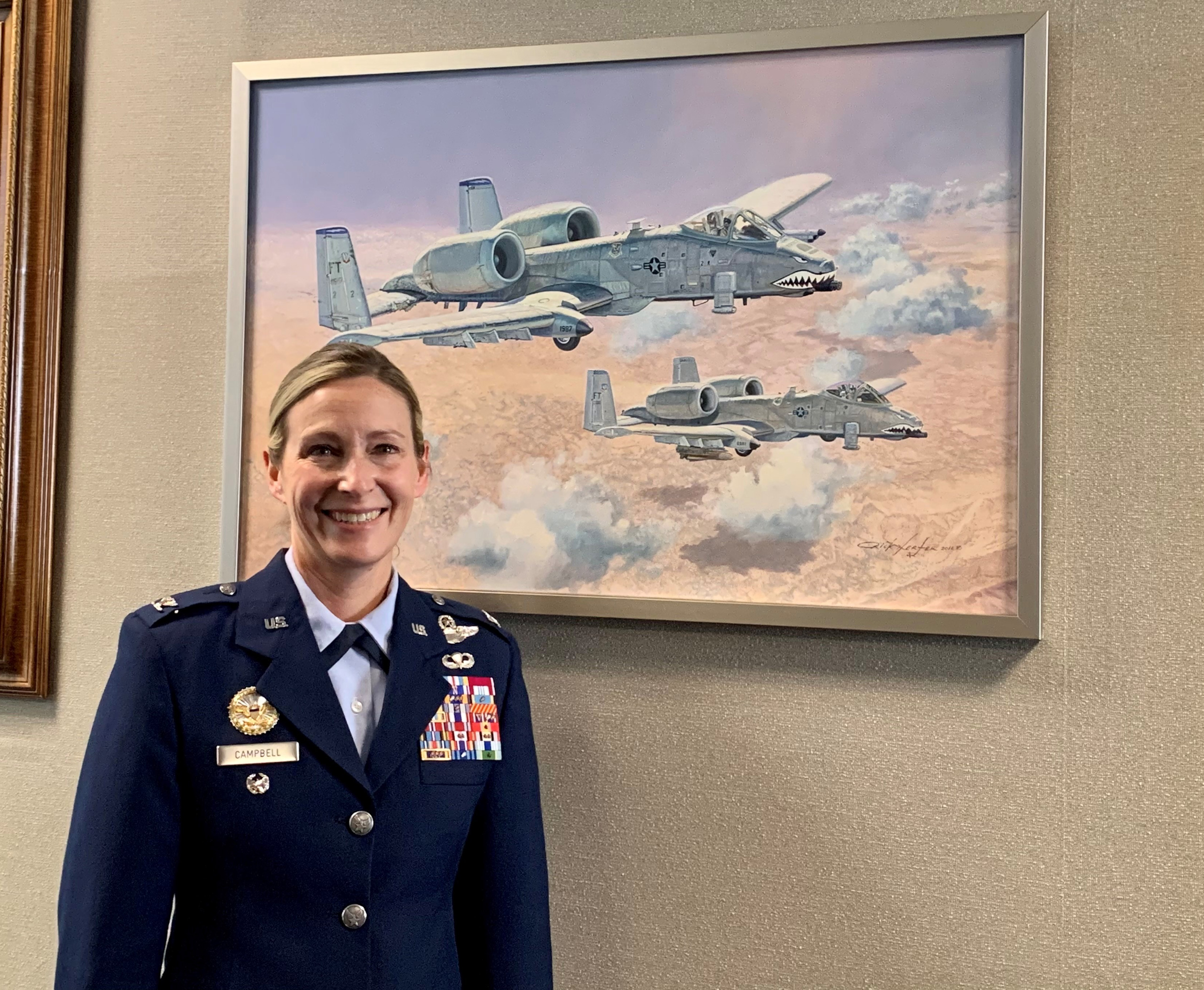 Kim “KC" Campbell in front of “Fight Like A Girl!" now hanging in Fairchild Hall at the U. S. Air Force Academy. Photo credit: USAFA.

The painting shows pilot USAF Captain Kim (Reed) Campbell, a veteran attack pilot who fellow airmen nicknamed “KC” for “Killer Chick,” returning to base after a heroic and dramatic close air support mission with her heavily damaged aircraft. The battle to fly her Warthog home after rescuing troops in the mission and taking a hit earned now Major Campbell the Distinguished Flying Cross (DFC).

Story behind the painting

Here in the artist’s own words is the remarkable story behind the painting:

April 7, 2003, was like many other days for allied ground troops during the invasion of Baghdad. Determined resistance and counterattacks from Iraqi troops put a demand on U.S. air assets for close air support. Over the battlefield roamed the A-10 Warthogs of the 23rd Wing, one of them flown by a young Captain by the name of Kim (Reed) Campbell. Her squadron mates called her “KC” for “Killer Chick.”

An urgent call for CAS vectored KC and her squadron commander Lt. Col. Richard “Bino” Turner into the target area. Republican Guard elements had been attacking troops from a dug in and fortified position. Bino and KC began to strike but after one of the attack runs the mission took a grim turn. As KC began climbing away after releasing weapons her aircraft violently shuttered, she described the force as if getting “rear ended by a bus.” At only 5,000 feet the Hawg dramatically pitched nose down and began to roll out of control. The loss of all hydraulics made the jet uncontrollable and KC momentarily thought of ejecting. However, being over the enemy, she realized that that was the last thing she wanted to do. Instead the pilot switched the aircraft to manual reversion and the rugged aircraft began slowly responding. Realizing that the Hawg was now flyable she dumped her remaining weapons to lighten the jet and began a gradual climb away from the target area.

With some altitude and distance from the enemy force Col. Turner flew up close for a visual inspection of her jet. He was sobered to see a portion of the horizontal stabilizer peeled back and shredded and most of the rear area of the jet heavily damaged by shrapnel. Bino suggested to his wingman that after reaching friendly territory she eject from the Hawg.  After a bit more conversation about the situation, Captain Campbell believing the airplane could be saved, made the decision to fly the jet back to base in Kuwait.

Since the A-10 had no hydraulics flying it was like handling a truck with no power steering. The gear would have to be manually pumped down and there would be no brakes to slow the airplane upon landing! Previous to this mission only two A-10 pilots had attempted this feat. One pilot had died when the airplane flipped over on landing and although the second pilot survived his landing the airplane broke in two.

As KC approached the runway and crossed the landing threshold, the A-10 started to roll quickly to the left. In a split second the Capt. counteracted, righted the roll and executed a nearly perfect landing. The airplane eventually slowed and rolled to a stop observed by an amazed crowd of maintainers, emergency personnel and fellow pilots. For her amazing airmanship that day and the heroism of the mission, Capt. Kim “Killer Chick” Campbell would receive one of the most prestigious awards for valor, the Distinguished Flying Cross.

This painting, by aviation artist Rick Herter, shows Capt. Campbell and Col. Turner as they return to base with KC’s heavily damaged airplane.

Aviation artist Rick Herter’s historic aviation paintings are hung in numerous private and public collections around the world. Herter is a longtime member of the USAF Art Program, which offers artists the opportunity to travel with the Air Force to locations around the world to witness military facilities and exercises for the purpose of recording these events in the form of paintings.